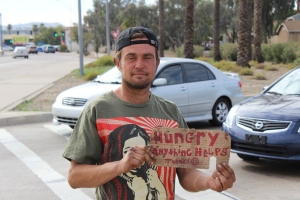 First thing he told me when I asked him if I can take his photo was, “I’m you’re guy.” He went on to confess to me that he’s a heroin addict and showed me his arms with scars from the needles. He also said that he used to be a carpenter, but can’t find work anymore. I told him that I am on a journey to capture images of people; rich, poor, young, old, and colorful. I told him that his life has meaning; that he has something to share with people; and that he is not defined by a single snapshot of his life. He loved that I wanted a picture of him with his cardboard sign even though it had some of his blood on it with his greasy holding it. His words were actually, “That’s the sh*t man!” 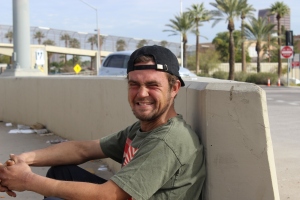 He left me with a smile and said that he’ll never forget this day. His sign was truthful: Anything did help. Looks like he needed a friend today more than anything else, and to be reminded that his life isn’t a ‘single’ story called homeless man.

4 thoughts on “Anything Helps”