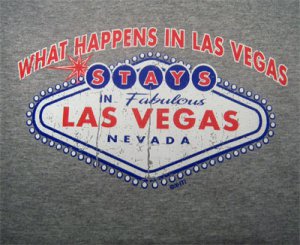 Las Vegas is famous for many ‘riskay’ things, and this phrase has become the trademark of the city’s gambling sector: “What happens in Vegas, stays in Vegas”. This is implying that what you do here in Vegas won’t hurt your wife, husband or loved ones, as long as they never find out what you do here. Worse yet, there is a belief that illicit behavior won’t even hurt the person doing it.

This same thinking is wrapped up into the old adage that goes like this: “What we don’t know, won’t hurt us.” When I was a kid, I used to talk about things like, “What if the fast food worker spit in your hamburger?” or “What if your hamburger was dipped in the toilet?” You know… things that everybody worries about, right? I remember talking and thinking about this every now and then when we would eat out. The conversation always ended, in my mind at least, “As long as I don’t know, I’ll be fine.” I was a garbage disposal as a kid.

I was thinking about all of this when my brother showed me this picture of a McDonald’s sign in California. Some of McD’s food is hazardous to your health, so much so, that California McD’s, by law, must post this warning in their stores. My brother told me that even though this sign has been posted, sales have not been hindered. This made me rethink the old adage and I began wondering what it takes to change people, even though they know something will cause harm to them.

Eating a McD’s big mac that has so many preservatives bugs or mold won’t even eat it, or going to Vegas and giving your soul away to someone who is there just to pay rent and cover their bills, have caused so much damage to our bodies, but we still do them. Seems strange that this belief of what we don’t know won’t hurt us is still allowing us to ignore dangers and toxins in our lives.

What we desire, we get. So merely saying, “I want to act differently” or “I want to stop doing those things” isn’t enough to get people to stop the foolishness. We are still eating cancer causing food, we are still performing sexually illicit, brain damaging acts, and big industries are still producing cheap consumable products for a profit only to waste our resources and environment, because we consumers buy them.

Our desires are what need to be challenged and changed, and this doesn’t happen by mere will power or behavior modification. It happens by realizing and owning that we’re all part of the problem, and as hard as humanity tries, as ‘sophisticated’ as we get, we can’t solve the problem of evil and illicit human desires.