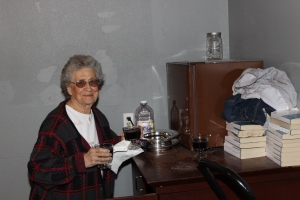 This is Helen. I am thankful for her. Almost five years ago, shortly after we first planted Kineo Church, her and Gordon (her late husband and my friend) came to Kineo and were content with overly loud music and no one within 20 years of their age to hang out with. They said they wanted to come to Kineo because it was closer to their house than their other church, and they didn’t have to walk up any stairs here. I believed them, but now as I have time to reflect about the five years God gave us at Kineo and the memories of Gordon and Helen, I don’t think that’s why they came. They came to serve. They came to help. They came to offer. Week after week, month after month, the notes, the letters, the meaningful and intentional gifts (one of them was a Messianic prayer shawl!) that were meant to encourage my heart, but not just mine; many others received from her in the same way. I was their pastor; they blessed me more than I blessed them. It wasn’t a coincidence when Gordon passed away over 2 years ago, that Helen was the one giving thanks for all that God had blessed her with, and for the years her and Gordie shared on this earth.

Eucharistía is the Greek word for thanksgiving, and it’s also the term that was given to the early church for the remembrance of the Lord’s Supper. After Gordie passed away, Helen began to prepare the communion elements every Sunday, and often this job is overlooked and not much meaning goes into it. Not for Helen. This was her small offering, but I shouldn’t call it small. The one preparing for the “thanksgiving meal” of the church was the most “thankful one” of our church body. That’s not a coincidence. There’s a depth of meaning and imagery to that, so much so, that to try to explain it would be to take away from the display of the story: the “thankful one” preparing the “thanksgiving meal” with Jesus.

Helen, thanks for all your years of eucharistía. I am more thankful because of your sacrificial living! What or who do you need to give thanks for today. Don’t miss out on the opportunity to offer eucharistía.