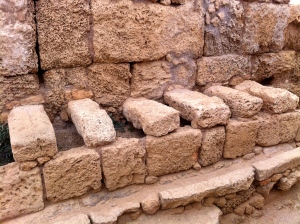 A few years ago, I had the privilege of going to Israel, and traveling throughout the regions where Jesus lived and traveled. Some of the visits we made were at ancient sites such as Beth She’an, an ancient Egyptian city that later was inhabited by the Philistines. King David, during a series of military campaigns drove out the Philistines from this city, which became a major city during the time of King David and King Solomon, later to be taken from the Israelites by the Assyrians who burned the city down. Lots more history about this place, but my point wasn’t to write an historical post.

The picture above is of a bathroom next to a stadium in Beth Shea’an, where people would let it all out, right there, while rubbing shoulders with their neighbors. The way it worked was each butt cheek would rest on each side of the stone and there your crap would flow downhill beneath you, and you and your neighbor would share in the stench together… I’m sure it was a bonding experience. It makes me thankful for stalls and doors at public restrooms, but then I wonder how much relational intimacy is lost with our civilized bathroom practices! Ha! It’s hilarious to even think about. But the more I thought about this, this is what we do on social media, we let all of our crap out, but we aren’t rubbing shoulders with our neighbors like the ancients. We are cyber friends, giving cyber hugs, and when we let our crap fly, we are not face to face so our demeanor is different than if we were face to face.

This reminded me that as much as social media is the new marketplace of our day where ideas are swapped and things are debated, that it’s important to force myself to continue airing my crap in front of real people, hashing it out shoulder to shoulder where we can talk without typing. Keeping it personal is important, and much more fruitful. Even as I blog, I know that there needs to be opinions on the web to stir minds and conversations, but I am also challenged to continue to the convos (the good, the bad, and the ugly ones) into real life convos with friends, families, and colleagues. This forces us to be more considerate and personal (with our bad smells and all). After all, I would never smear someones crap all over them while I’m sitting next to them, but it’s real tempting do that in the cyber world.