This is Ron. I was at lunch this afternoon at the Welcome Diner on 10th St. and Roosevelt (great food there by the way!) with my friend Nick. Ron casually strolled up to us after we had ordered, sat down, and comfortably began having a conversation with us. He told us that he just left St. Luke’s Behavioral Health Center. I asked him why he was there. He said, “I’m depressed.” Nick and I said that we were sorry to here that he struggles with depression. He went on to tell us, “I’m a really good rock-n-roll guitarist. A lot of people say that I’m better than Jimmy Hendrix.” “Wow,” I said, “I would love to hear you play.” He said, “Yeh, I’m really good. I’m not trying to brag, I am just insecure most of the time and playing guitar is one thing I’m good at. It makes me feel good.”

Then he showed me his tattoo and said his name is “Paranoid Kingpin”. I said, “What’s your real name?” He said, “Ron”. Then he went on to tell me that he’s got the same tattoo as Ozzy Osborne, and proceeded to turn his arm upside down and tell me that his tattoo is an upside down cross with a pentagram on it and that it was supposed to keep away bad spirits. We just listened. 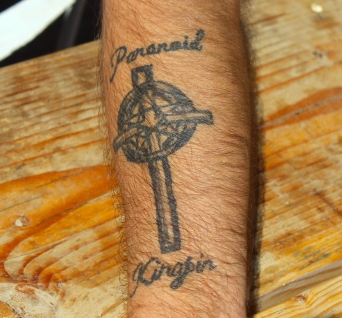 Later on before we ate (we bought him a meal so he could eat with us), I told him that we were going to pray for our food and I asked him, “Is it okay if we pray for your depression Ron?” He said, “Sure.” He prayed with us and after the prayer he said, “I’m actually a follower of Jesus. I got this tattoo when I was angry at God, but later I realized that I was just angry at Christians. My family excommunicated me because I’m schizophrenic and they’re Christians.” I told him I’m sorry to hear that.

This is where the judge inside of me says to myself, “Well, I’m sure there’s more to your story Ron that would make us all cringe. I don’t know your family’s side of the story.” At least that’s where my mind went. I’m not proud of that, just being honest. Then I thought to myself, “There’s much more to my story that would make Ron cringe in disbelief too.” I felt sad for Ron, that his family has dissociated with him and that he is reminded daily of a tattoo that speaks to who he thinks he is louder than who God thinks he is. I’m sad that Ron is often judged according to the flesh. I’m sad that he struggles with depression. But I’m glad we got to tell him that Jesus is different than us, and that Jesus loves him and is with him in the midst of the darkness. He smiled and received it.

Then he proceeded to tell Nick and I that everyone has gifts to offer. “I play guitar. Bus drivers offer their service to take us places. Plumbers help keep pipes working so we can be clean and sanitary. The people who made his shoes help him walk from place to place in comfort,” etc… He went on and on and named over a couple dozen vocations and how they are gifts to the whole. Ron gets it, that we all belong to one another, and we all have something to offer each other. I always learn so much from those who I am tempted to brush over and not give much of my time to. I’m glad Ron didn’t adhere to my social rules and interrupted my scheduled lunch meeting with Nick.

We left and Ron had a sense of dignity about him as he walked around Welcome Diner and I thought, “You never know when you’re entertaining angels, or at least wise sages.” 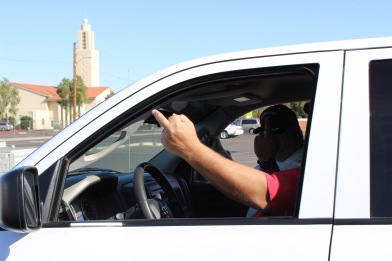 Has this ever happened to you? Being flipped off that is… Last week I was driving on 19th Ave near Indian School (in Phoenix) with my friend Billy Thrall. I was in the passenger seat when these guys drove up next to us motioning through the window to roll down our window. So we did, and the driver said, “You guys want to buy an entertainment center?” With my camera already in hand ready to go, I said, “No, but can I take your picture?”

The picture above was their response. I’m so happy I captured that moment, and Billy and I died laughing thinking, “Did that really just happen?” Yes, yes it did just happen, and you know what, I respect them for doing it. I know, I know, I’m weird like that. I can remember when I was an adolescent and I learned what ‘flipping someone the bird’ was, and one night I was talking with my dad about it and other things about life and relationships. My dad told me, “Jeff, it’s better to be honest with how you feel than to hold it in and brew with anger gossip in your heart and gossip to others about it.”

That’s wisdom, and I listened to it and took it in. Later that night, after some small, petty disagreement with my dad before I went to bed, I looked at my dad while ‘flipping him the bird’ (literally) and said, “Hey dad, good night!” We got a good laugh about that back then, and we still do today.

Many of us have ‘flipped the birds’ in our hearts to people we love, and then acted like we were all buddy, buddy with them at the same time. These guys in the truck are more respectable because they had the freedom (albeit a rebellious freedom that I’m not advocating!) to let out how they truly felt. We would do well, and it would be very loving to those we know, not to BS them with fake affection if we aren’t feeling it. Honesty is beautiful. Being honest about being mad at someone you are close to is even more beautiful.

A Proverb says: Faithful are the wounds of a friend; deceitful are the kisses of an enemy. (27:6) Don’t give kisses to brothers and sisters when you’re ‘flipping them off’ in your heart. Be real. Be loving. Give them the gift of honesty, which is loving. After all, it feels good sometimes to let the birds fly free!