This is Ron. I was at lunch this afternoon at the Welcome Diner on 10th St. and Roosevelt (great food there by the way!) with my friend Nick. Ron casually strolled up to us after we had ordered, sat down, and comfortably began having a conversation with us. He told us that he just left St. Luke’s Behavioral Health Center. I asked him why he was there. He said, “I’m depressed.” Nick and I said that we were sorry to here that he struggles with depression. He went on to tell us, “I’m a really good rock-n-roll guitarist. A lot of people say that I’m better than Jimmy Hendrix.” “Wow,” I said, “I would love to hear you play.” He said, “Yeh, I’m really good. I’m not trying to brag, I am just insecure most of the time and playing guitar is one thing I’m good at. It makes me feel good.”

Then he showed me his tattoo and said his name is “Paranoid Kingpin”. I said, “What’s your real name?” He said, “Ron”. Then he went on to tell me that he’s got the same tattoo as Ozzy Osborne, and proceeded to turn his arm upside down and tell me that his tattoo is an upside down cross with a pentagram on it and that it was supposed to keep away bad spirits. We just listened.

Later on before we ate (we bought him a meal so he could eat with us), I told him that we were going to pray for our food and I asked him, “Is it okay if we pray for your depression Ron?” He said, “Sure.” He prayed with us and after the prayer he said, “I’m actually a follower of Jesus. I got this tattoo when I was angry at God, but later I realized that I was just angry at Christians. My family excommunicated me because I’m schizophrenic and they’re Christians.” I told him I’m sorry to hear that.

This is where the judge inside of me says to myself, “Well, I’m sure there’s more to your story Ron that would make us all cringe. I don’t know your family’s side of the story.” At least that’s where my mind went. I’m not proud of that, just being honest. Then I thought to myself, “There’s much more to my story that would make Ron cringe in disbelief too.” I felt sad for Ron, that his family has dissociated with him and that he is reminded daily of a tattoo that speaks to who he thinks he is louder than who God thinks he is. I’m sad that Ron is often judged according to the flesh. I’m sad that he struggles with depression. But I’m glad we got to tell him that Jesus is different than us, and that Jesus loves him and is with him in the midst of the darkness. He smiled and received it.

Then he proceeded to tell Nick and I that everyone has gifts to offer. “I play guitar. Bus drivers offer their service to take us places. Plumbers help keep pipes working so we can be clean and sanitary. The people who made his shoes help him walk from place to place in comfort,” etc… He went on and on and named over a couple dozen vocations and how they are gifts to the whole. Ron gets it, that we all belong to one another, and we all have something to offer each other. I always learn so much from those who I am tempted to brush over and not give much of my time to. I’m glad Ron didn’t adhere to my social rules and interrupted my scheduled lunch meeting with Nick.

We left and Ron had a sense of dignity about him as he walked around Welcome Diner and I thought, “You never know when you’re entertaining angels, or at least wise sages.”

Nonnie and Poppy are my parents. This is what our kids call my mom and dad. Nonnie is the Italian (my mom’s 100% Italian!) term from Grandma and Poppy just feels right to say after “Nonnie”, even though it’s not Italian. Nonnie and Poppy have been with us since the beginning of our church plant at Kineo. Honestly, Kineo wouldn’t have happened without them being there. They have been the most amazingly faithful and supportive members of our body, through the crap and the roses! I wanted to give them a shout out today and let them know that I am thankful for them. Words can’t express how they’ve blessed me, my wife, and our kids. Since we started Kineo, we had our fourth child, I started seminary full-time, worked side jobs to pay the bills, and navigated the complexities of family life. My parents have been gamers this whole time, sticking it out with us, blessing us, watching kids, changing diapers (well, at lest Nonnie changed em’), tithing way more than they could afford, and being a display of love, joy, and sacrifice to the church family at Kineo.

Thanks for all you’ve done mom and dad. I love you! 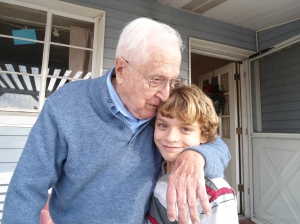 Almost 84 years between these two. The advice from the older to the younger… “Don’t take yourself too serious.” (The old adage is from great Grandpa Isch with one of his 23 great grandchildren)

When talking about Church lately, it has been popular to use the phrase “missional church”, and with that, there are probably thousands of meanings. Many people see a hipster church, with indie rock worship, a funny, cool looking, gospel-centered preacher, and then give that church the title, “missional”. Kineo has been labeled ‘missional’ because of that, but of course not because of the cool looking, gospel-centered preacher. This labeling of churches in this regard is terribly misguided.

At best, the word missional describes not a ‘specific activity’ of the Church, nor the style of apparel of it’s leaders wear, the trendy modern ambiance, or the type of music that is played by the worship band, but it describes ‘the very essence and identity’ of the church as it participates in God’s mission.

‘Mission’ (John 20:21) reminds us that the Church was created to be oriented to the world, existing for the sake of others. Cross-cultural missionaries of the past few centuries were sent with a task that was primarily not for themselves but for the sake of those to whom they were sent. Thus to describe the Church as ‘missional’ is to define the entire Christian community as a ‘BODY’ sent into the world, existing not for itself but to bring good news to the world. This is our identity.

We’re not Christians, we’re ‘family members’ joined by & with Christ, with a mission to make His beauty and worth known over every other earthly treasure.

Paul said that his aim in life was that “the life of Jesus might be made known to others in his mortal flesh” (2 Corinthians 4:11). In other words, his aim is that “his body might make Christ’s body real to the world.”