This is the plaza at the corner of 37th Ave. and Camelback. It’s one of the staple symbols of my hood. It’s also a picture of the diversity of my hood, which has been fun to live in the middle of such celebrated differences. The Middle Eastern culture, the Latino culture, some American culture, and across the street there’s lots of Asian culture. At the top of the sign is the name of the plaza, Liberty Plaza. This is an old name that was given to this shopping center years ago when hope of a middle class neighborhood would make it’s mark on the city, but it never has risen to be “the desired location” it wanted to be over the years.

Around 30 years ago, most of the property owners moved out of this hood and began buying “nicer” homes in “safer” neighborhoods because “different” cultures were coming in and changing the safety of the desired liberty the homeowners (the gentry) wanted. In pursuit of a better life, the gentry took flight and left our hood. Differences aren’t celebrated by all. For many, differences are threatening, scary, and feel invasive on the comfort of our lives.

Liberty Plaza 30 years ago thought they were “losing” their freedom because of the different colors and cultures of people moving in, so the “old” guard left. And now the “new” guard, even though Liberty Plaza doesn’t seem very liberated in a material sense, is experiencing liberty. Embracing, even celebrating differences. I am praying for Liberty Plaza, for the success of the businesses here, and for my neighbors who work and own these businesses. I pray that the gentry’s who are moving back in the hood will honor and respect those who stayed when they and their money left. I pray that as the local university grows and takes over the hood, that they will make room for our diverse friends who have weathered the hard economic years and that justice will be a top priority as corporate growth happens.

Liberty Plaza, thanks for teaching us to embrace and celebrate diversity! 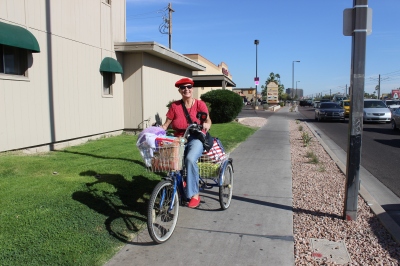 Her and her neighbors don’t have a car, but she has a bike, and she was happy and thankful about that. Her community contribution is to pick up groceries at the store. As she approached me and saw my smile and that I loved her “get up”, she slowed down as I asked her if I can take a picture of her and her bike. She gladly stopped for the photo and she said, “Sure, I’m photogenic!”

She has a beautiful smile.